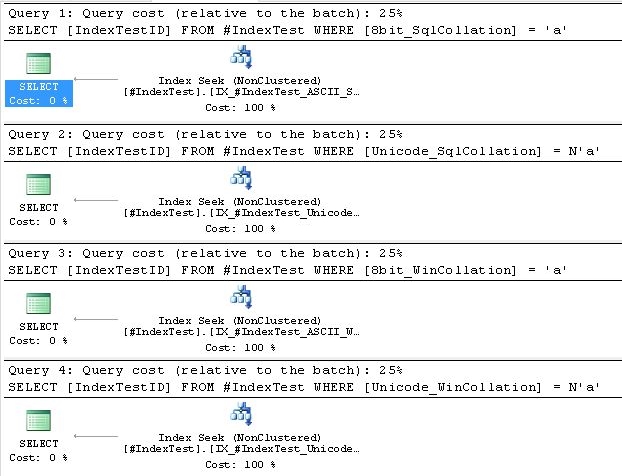 You may have heard, or read, that you should not mix VARCHAR and NVARCHAR datatypes, especially when one of them is a JOIN or WHERE predicate / condition, as doing so will invalidate indexes. While it is always best to have all datatypes be the same for a particular operation (comparison, concatenation, etc), the actual impact of mixing these two types is a bit more nuanced than most people are aware of.

To start with, we need to consider that internally, SQL Server needs the datatypes on both sides of a comparison (or concatenation) to be the same. If you have a mismatch of types and do not explicitly convert one type to the other so that they are the same, then SQL Server will handle this itself. This is called an implicit conversion and is handled by the appropriately named internal function, CONVERT_IMPLICIT() ("internal" meaning you can’t call it, but it will show up in execution plans).

Which datatype will convert to the other is determined by Data Type Precedence. Since N[VAR]CHAR has a higher precedence than [VAR]CHAR, the [VAR]CHAR value will be converted to N[VAR]CHAR. Having the conversions go in this direction makes sense as it should never lead to any data loss since Unicode should be able to map all characters from all 8-bit code pages.

Since we know that [VAR]CHAR will convert to N[VAR]CHAR, then "accidentally" using a [VAR]CHAR value to compare against an N[VAR]CHAR column shouldn’t prevent using an index on that column since the data in that column (and hence in that index) is already "correct" for that operation.

But, on the other hand, "accidentally" using an N[VAR]CHAR value to compare against a [VAR]CHAR column should be expected to have some difficulties since the indexed values are not "correct" for that operation. And, while this scenario is where we start to see issues related to the datatype mismatch, the overall impact on performance depends entirely on the type of Collation being used (as we shall see in just a moment).

While the SQL Server Collations have not been officially deprecated, they mainly exist for backwards compatibility and it is highly recommended that newer Windows Collations should be used unless there's a pressing need to use a SQL Server Collation. Unfortunately, the default Collation for new installations (at least on Operating Systems using "US English" as the language), is a SQL Server Collation — SQL_Latin1_General_CP1_CI_AS — and it is this default that's likely the root cause for the commonly held rule that mismatching datatypes causes performance problems due to "implicit conversions" (since most people are probably not doing additional testing with Windows Collations).

The simple example below illustrates the behavior across the four combinations of mismatching the two datatypes in each of the two Collations.

For this test we will have a single table with four columns (each one representing one of the four previously mentioned combinations). A single row of data is added simply to avoid having an empty table (and as a result, empty indexes), just in case that would somehow affect if / how the indexes are chosen by the Query Optimizer. As the final comment indicates, please do not forget to enable "Include Actual Execution Plan" if you don't already have it enabled.

This first test is merely a control to assure us that under "normal" conditions, the system works as expected and each of the indexes is indeed used.

These next two tests show the behavior when using a SQL Server Collation.

As expected, there's no problem at all with the NVARCHAR column mixed with a non-Unicode value.

Also expected is the inability of the VARCHAR column to get an Index Seek when mixed with a Unicode value. Not only does that combination get an Index Scan, but it also has a warning on the implicit conversion. Again, the cause of this behavior is the drastically different sorting algorithms: simple ordering for VARCHAR data vs. complex linguistic rules (i.e. Unicode) for NVARCHAR data (changing the datatype changes the sort order).

The final two tests show the behavior when using a Windows Collation.

As expected, there's no problem at all with the NVARCHAR column mixed with a non-Unicode value ("Query 1" plan shown above).

But, as many would probably not expect, while there's a slight hit to performance due to the implicit conversion (the "Compute Scalar" operator in the "Query 2" plan shown above), it does not get a warning. Also, unlike the VARCHAR column using the SQL Server Collation mixed with a Unicode value, this time, with the Windows Collation, we are back to getting an Index Seek :-). This is due to the Windows Collation using the same linguistic (Unicode) rules for both VARCHAR and NVARCHAR data. Therefore, the VARCHAR values in the index are already in the same order they would be in if converted to NVARCHAR (changing the datatype does not change the sort order).

As shown above, the effect of mixing N[VAR]CHAR and [VAR]CHAR types on the ability to get optimal index usage is entirely dependent on which one of those is indexed and which type of Collation is being used:

ALSO, while it is common to hear people warn against “implicit conversions” causing performance problems (at least in terms of mixing VARCHAR and NVARCHAR data), the tests here prove that it’s not the implicit conversion itself that’s the issue. The real issue is the change in sort order resulting from that specific conversion scenario: indexed VARCHAR column using a SQL Server collation. The implicit conversion when using the Windows collation had only minimal impact.